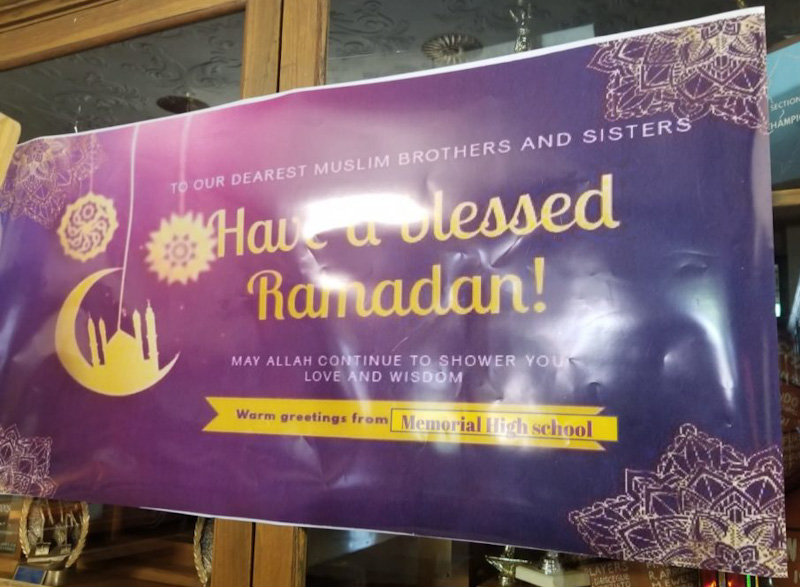 Two days after FCDF sent a “cease and desist letter” to the West New York School District, attorneys for the school district’s Board of Education notified FCDF on Friday that “the poster(s) that may have been deemed legally impermissible in a public educational setting have been removed from Memorial High School.” Early last week, a Memorial High teacher had contacted FCDF, expressing grave concerns that the high school was unlawfully promoting Islam.

Despite the school district taking down the posters, FCDF is continuing to investigate the matter—including submitting a public records request—after alarming new facts have come to light about the extent of Islamic influence in Memorial High School.

At issue is two Muslim high school students going class-to-class during school hours, interrupting lessons, and trying to convert students to Islam under the guise of teaching them about Ramadan. The students are also allegedly responsible for creating massive bulletin boards promoting Islamic religious practices and inviting students to learn more about the benefits of being a Muslim.

According to FCDF’s investigative findings thus far, the two Muslim students’ proselytizing is sponsored by the North Hudson Islamic Educational Center’s “Dawah Committee.” According to its website, the Dawah Committee’s mission is “sharing the guidance of the Glorious Quran and the mercy of the prophet Muhammad (PBUH) with our neighbors and friends.” The committee is “also committed to empowering Muslims to be advocates of the message of Islam.”

In an article entitled “Sharing Islam (Dawa) in Public Schools,” the Muslim advocacy group Sound Vision states “Dawa [or Dawah] means to share the message and traditions of Islam with fellow non-Muslims.” Sound Vision declares that “spreading the message of Islam” in the public schools is part of the “obligations of Dawa.”

“For years, courageous Americans have been sounding the alarm about the threat of Islamic indoctrination in America’s schools, only to be smeared as Islamophobic, anti-Muslim conspiracy theorists. What is transpiring in this school district is no doubt a conspiracy, but the blatant Islamic proselytizing here requires no theorizing—it is fact.”

As part of its public school outreach, the Dawah Committee provides a School Ramadan Outreach Kit 2019. The kit teaches public schoolchildren that Mohammed is “a prophet and righteous person” and that Allah is the “One God.” Among dozens of “activities” and lessons, the kit also encourages teachers to have their students fast, invite imams to school to extol students about the “spirit of Ramadan,” and “arrange for students to be part of an Iftar gathering at the Islamic Center or a [Muslim] parent’s home.” The kit encourages teachers to email the mosque at dawa@nhiec.com for more materials.

In its “Sharing Islam (Dawa) in Public Schools” article, Sound Vision has a section with the heading, “School Students: Receptive to New Ideas.” The section states:

Schools students are routinely exposed in their classroom to new information and opinions, hence they tend to be more receptive to new beliefs and ideas. Schools are therefore fertile grounds where the seeds of Islam can be sowed inside the hearts of non-Muslim students. Muslim students should take ample advantage of this opportunity and expose their school mates to the beautiful beliefs of Islam.

At Memorial High School, as part of their Dawah “obligations,” the two Muslim students posted a link on the Ramadan bulletin board to www.mybestramadan.com, operated by a “community of devout Muslims observing Ramadan.” The website has a post entitled “Ramadan in the Public Schools,” which chronicles the two Muslim students’ Dawah efforts at Memorial High School. The post states:

Jazaakum Allahu khairun – way to go! We congratulate Sr. Nour Hasan and cousin for their outstanding dawah educational awareness in the Public Schools. We pray that other students and parents will follow suit in the near future. May Allah subhanahu wa ta’ala reward them manifold.

We also thank Memorial H.S. for their kindness and inclusivity of our Muslim students.

The post also features a narrative of one of the Muslim student’s “dawah educational awareness”:

The NHIEC Ramadan in Public School Package [see above, the School Outreach Ramadan Kit 2019] was helpful. I also contacted Project Eid Awareness. Sr. Marjana sent me a banner – a white one you can see in the pictures.

I did the Bulletin boards which I have the presentation slides on.

When I asked the school if I could hang a banner up the school made their own banner that they put in the entrance of school.

I did the presentation in 5 different classes: 3 History, 1 English and 1 French class. One was a freshman class and the rest were 10th grades. I made goody bags that had candy and I asked questions. Afterwards, I gave out the treats to whoever answered the questions. I also made some Arabic sweets for one of my classes. No one else helped in the presentations except for my cousin. She did the one about the traditional food and stuff that we have during Ramadan.

Muslims can create opportunities for non-Muslims to ask them question by performing simple conducts like: saying “insha Allah” when talking about a future activity; saying that they are going to prayer during Salaat time, not eating during fasting, brothers wearing kufi, sisters wearing hijab etc, not using swear words during conversation, not lying, using modest clothes etc. And the questions that do crop up from their peers should be dealt with in a very concise and eloquent manner. Doing this would require some basic knowledge on the part of Muslim students.

According to Sound Vision’s “Bottom line”:

We should use every opportunity presented or created to sensitize non-Muslim peers and school staff with Islam and establish an environment in which every where a non-Muslim turns he notices Islam portrayed in a positive way and get influenced by it and eventually accept Islam with Allah”s guidance, insha Allah.

Sound Vision also exhorts: “Remember, It was always Muslim creativity, Iman and the help of Allah that has constantly won victories for the Muslims, and schools and campuses won”t be any exceptions.”

Despite the unfettered dawah underway in Memorial High School, West New York School District has indicated that the matter is “moot” and that it will take no further action to protect students and staff from Islamic indoctrination.