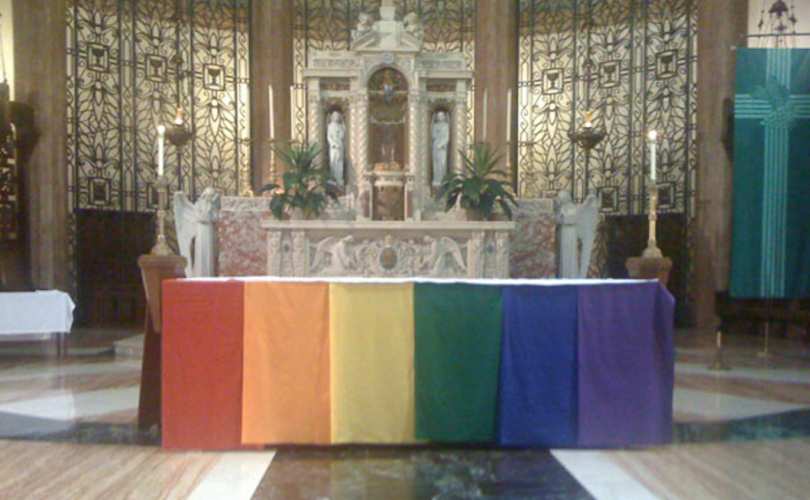 The Diocese of San Diego is having a Mass for the “Families of the LGBT Community” on October 7 and local gay activist Nicole Murray Ramirez is calling this event “historic.”

Indeed, it may be historic, but not for the reasons he thinks. Nicole Murray Ramirez is a male transvestite who has regularly mocked the Catholic Church by dressing up like a nun and calling bingo at a local gay bar. He is also a Commissioner for the City of San Diego.

Ramirez sees this Mass as an opportunity to promote change in the Church. This is not the kind of change that means more openness and compassion to those hurting and in need of healing. Rather, what he seeks is a change of the doctrines of the Catholic Church on marriage, family, and human sexuality. The legitimate purpose of this Mass is to provide an opportunity for healing for those who are hurting. This is in line with Pope Francis’ concept of the Church as a “field hospital” for all of us who are wounded and in need of such healing: .

The gay activist’s view of the purpose of this Mass is to be an instrument of political change and not spiritual renewal. This is not a purpose that Pope Francis would approve. Indeed, in his famous interview in which he made the comment “Who Am I to Judge?” he made a key distinction in this regard. Pope Francis distinguished between a person of good will, who may be struggling with same-sex attractions, from a gay activist who is seeking to change society and the Church: Here is the actual quote from Pope Francis in that regard: “I think that when we encounter a gay person, we must make the distinction between the fact of a person being gay and the fact of a lobby, because lobbies are not good. They are bad. If a person is gay and seeks the Lord and has good will, who am I to judge that person?”

For this reason, Pope Francis’ analogy of the Church as a field hospital is particularly appropriate in this setting. A person goes to the hospital because they realize that they are sick or hurt and they want help. I remember a good Catholic priest relating at a retreat that I attended years ago that not all the advice he sometimes gives in Confession may be welcome. For example, he said he might tell someone that if they want healing from a particular sin that they need to go to Mass twice a week. If the person were to respond that is too difficult and they do not have time, his response would be as follows: “I am the physician here and this is the medicine that I am prescribing. If you want to get well, then you need to take your medicine. Otherwise, I cannot help you.”

The gay activist is not coming to Church to take their medicine and get well. In fact, they do not think that they are sick at all. Rather, they think that the Church is backward and bigoted and has to change. For that reason, they do not want the Church even offering to help anyone who is struggling with same-sex attractions to live their lives in conformity with Church teaching. They want the Church to tell them that those attractions are not “disordered” and that acting on them is not sinful. Thus, the gay activist wants to remake the Church, not in the image of Christ, but in their own image. And the “field hospital” view of a Church helping people to change — well that needs to be eliminated for good — at least with respect to any matters that concern marriage, the family and human sexuality.

The gay activist, who wants the Church to view same-sex attractions as natural, normal and good, is also at odds with Pope Francis’ stand on opening the seminaries to homosexual priests: In that regard, Pope Francis reaffirmed the policy of Pope Saint John Paul II and Pope Benedict in reissuing this statement: “The Church, while profoundly respecting the persons in question, cannot admit to the seminary or to holy orders those who practice homosexuality, present deep-seated homosexual tendencies or support the so-called ‘gay culture.’ Such persons, in fact, find themselves in a situation that gravely hinders them from relating correctly to men and women. One must in no way overlook the negative consequences that can derive from the ordination of persons with deep-seated homosexual tendencies.”

Of course, when discussing a Mass for the “Families of the LGBT Community” there is also the issue of what it means to receive Holy Communion in a worthy state. The Church administers the sacrament of Confession before the sacrament of Holy Communion so that we can receive our Lord free from the stain of serious sin. The gay activist generally has no concern about such matters. Rather, they will more likely march up to receive the Holy Eucharist as a political statement, instead of as an act of true devotion. This is a grave offense to our Lord and can have eternal consequences for the immortal souls of all involved in this sacrilege. Hence, proper instruction on who may seek to receive the Blessed Sacrament at Mass is vitally important, and those in same-sex relationships are no exception:.

In the debate over same-sex “marriage” in Argentina, Pope Francis, who was then-Cardinal Bergoglio, stated the following: “Let’s not be naïve, we’re not talking about a simple political battle; it is a destructive pretension against the plan of God. We are not talking about a mere bill, but rather a machination of the Father of Lies that seeks to confuse and deceive the children of God.” We must also not be naive about the intentions of gay activists — like male transvestite Nicole Murray Ramirez — when it comes to the Mass in San Diego for “Families of the LGBT Community.” These activists will undoubtedly seek to use this “historic” event to further their demand that Catholics and other Christians celebrate their same-sex “marriages.” Of course, this is something that authentic Christians can never do.

The gay activists who have successfully captured the popular culture in our nation will not rest until the Church has surrendered to their incessant demands. Thus, the gay “lobby” to which Pope Francis referred, will also undoubtedly try to misuse this event to more aggressively demand that the Church change its perennial teachings on the related issue of “gender identity.” Pope Francis has repeatedly denounced gender ideology (see here and here). Therefore, we must hope and pray that this healing Mass will instead be an opportunity to lead genuinely repentant souls to accept the fullness of the truth of the Gospels — as reflected in the timeless teachings of the Catholic Church.