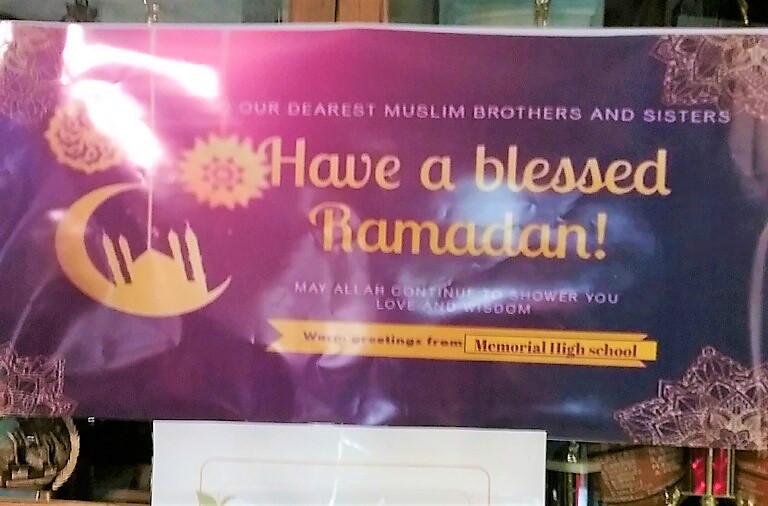 One poster offers “Warm greetings from Memorial High school” and wishes students to “Have a blessed Ramadan.” The poster then beseeches that “MAY ALLAH CONTINUE TO SHOWER YOU LOVE AND WISDOM.”

“A public school district would never hang posters praying for Jesus Christ to shower students with love and wisdom. Apparently the Left’s notion of the so-called ‘separation of church and state’ only applies to Christians.”

FCDF sent the letter to Superintendent Ms. Clara Brito Herrera and Scott Wolhrab, Memorial High’s principal, after an anonymous teacher contacted FCDF on behalf of other teachers, all of whom are deeply concerned about the school district’s promotion of Islam. Although the facts are still developing, school administrators are aware of the teachers’ concerns about the posters yet are deliberately keeping them up (Poster 1 and Poster 2).

The teachers are also frustrated that school administrators are allowing a group of Muslim students to go from classroom to classroom during school hours and interrupt teachers during the middle of lessons to indoctrinate students about Ramadan and Islamic beliefs.

“The First Amendment prohibits public school districts from endorsing a particular religion. These Ramadan posters and Islamic student presentations are sending a clear message to non-Muslim students that they are outsiders in the school community while sending a message to Muslims that they are insiders, the exalted student group. West New York School District is blatantly violating the Constitution.”

According to FCDF’s letter, the superintendent has two business days to remove the posters. Otherwise, the District may be sued.

School districts nationwide are succumbing to external pressure to promote Islam. In Washington, for example, FCDF is demanding that two school districts drop their Ramadan policies. In Dieringer School District, the superintendent adopted recommendations by the Council on American-Islamic Relations (CAIR) to order teachers to bless Muslim students in Arabic during Ramadan. In Northshore School District, school officials were implementing a special Ramadan program that, among other things, ordered teachers to create special Islamic safe spaces and revise lesson plans to make sure they are inclusive toward Muslim students. Northshore dropped the policy after FCDF threatened legal action.