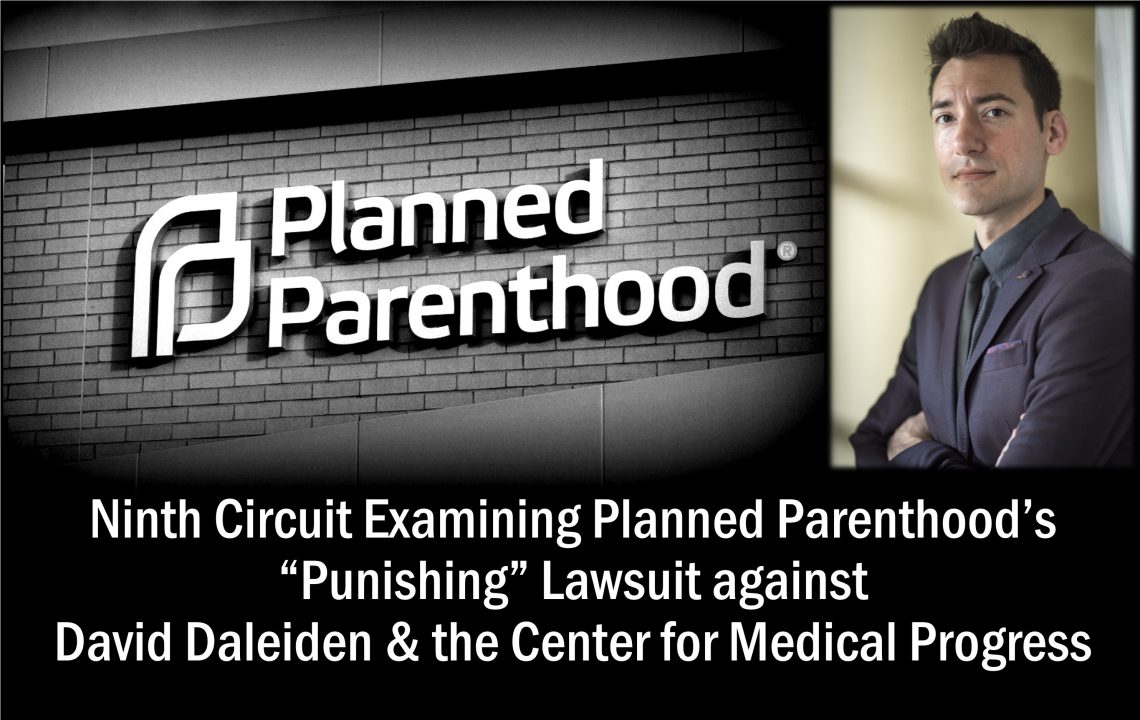 Tomorrow, the Ninth Circuit Court of Appeals will be considering whether Planned Parenthood was required to show evidence that its lawsuit against David Daleiden and the Center for Medical Progress (CMP) was not a frivolous attempt to silence—and punish—a bitter enemy. In 2015, CMP and Daleiden began releasing the results of a 30 month-long undercover investigation that exposed Planned Parenthood’s systematic violation of federal law through their sale of baby body parts. In response, Planned Parenthood Federation of America (PPFA) sued CMP and Daleiden in federal court in California with sweeping allegations of unlawful recording, breach of contract, trespass, unfair business practices, and a RICO violation.

Last year, the Freedom of Conscience Defense Fund (FCDF), which is representing CMP, filed a motion under a California statute to dismiss the lawsuit on the grounds that it is a frivolous “SLAPP”—that is, a “strategic lawsuit against public participation.” SLAPPs are lawsuits typically filed by powerful agencies to punish individuals for exercising their constitutional rights. Under California’s anti-SLAPP statute, Planned Parenthood was required to bring forward evidence that its claims were legally valid and that CMP and Daleiden’s undercover operations were not protected by the Constitution. However, the federal district court judge, Hon. William H. Orrick III, denied FCDF’s anti-SLAPP motion, ruling that PPFA was not required to show evidence in support of its allegations. FCDF appealed to the Ninth Circuit.

“This case presented one simple question for the district court: Does Planned Parenthood actually have evidence to support its allegations, or is their lawsuit merely part of their million-dollar vendetta to destroy David and CMP? Unfortunately, Judge Orrick ignored this question and simply gave Planned Parenthood a free pass.”

“Planned Parenthood’s evidentiary burden was not a hard standard to meet, but because their allegations were so blatantly frivolous, Judge Orrick should have stricken—at the very least—some of the claims. We hope the Ninth Circuit will affirm the First Amendment’s protection of investigative projects like David and CMP’s groundbreaking work, especially when such work goes up against the power and might of billion-dollar political machines like Planned Parenthood.”

Related Issues
1. FCDF will be asking the Ninth Circuit to review Judge Orrick’s decision not to recuse himself from the case because he had incorporated and then led a nonprofit that partnered with Planned Parenthood to open a clinic in its headquarters. Also, Judge Orrick’s spouse has taken to social media to publicly support Planned Parenthood and publicly condemn David and CMP.
2. FCDF has asked the United States Supreme Court to review Judge Orrick’s decision to enter an unprecedented gag order preventing David and CMP from publishing any Planned Parenthood videos taken at National Abortion Federation conferences. That petition for review has been distributed for a conference on December 1, 2017.